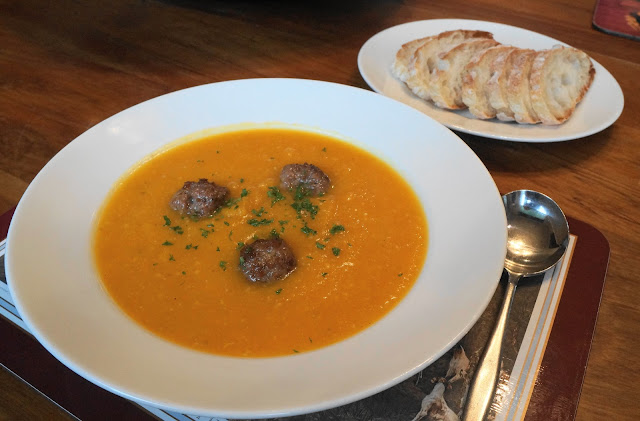 After all the unseasonal warm weather we have been having in the last few weeks, winter's icy breath blowing over Christchurch today came as an unwelcome but inevitable surprise. Crisp cold salads suddenly don't seem so appealing, and its time to reach for the kinds of foods that bring us warmth against winter's chill.

The autumn pumpkin harvest is well underway and any number of great meals can be made from this simple and seasonally inexpensive vegetable. It's a good time to stock up on pumpkins. Stored in a cool, dry and well ventilated place they will keep for weeks. Just be sure to choose a pumpkin that is free from blemishes and has the stalk intact, as any break in the skin will invite in mould and decay. 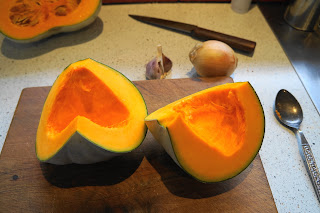 We brought this grey Crown Pumpkin a couple of weeks ago in anticipation of the winter chill. The following recipe is quick to prepare and can be served with or without the meat balls. It has bacon incorporated into the soup. If you prefer a vegetarian option just leave it out and use vegetable stock instead of water. Red split lentils can also be added to the soup if you would like to add a vegetarian protein source: add the lentils to the soup with the water; they will cook down to a pulp and blend with the pumpkin.

1 tablespoon oil
1 large brown onion - roughly chopped
half of a medium sized pumpkin - seeds and skin removed, then cut into chunks
1 large clove of garlic - crushed or sliced
4 rashers of bacon - cut into slices
enough  boiling water to cover the pumpkin in the pot
Salt and pepper to taste

Approximately 100g lamb mince - not too lean, it needs some fat
salt and pepper
1 tablespoon oil 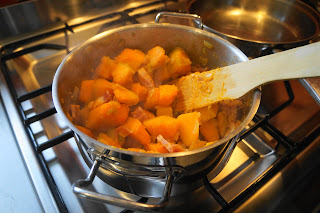 Heat the oil in a large pot. Add the chopped onion, garlic and bacon. Cook until the pieces start to brown. Add the pumpkin into the pot as you cut it up. Let the whole lot cook a little longer. 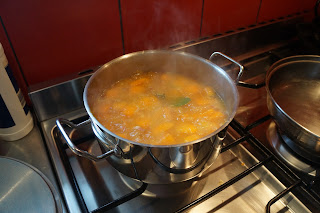 Then add the boiling water, stir and allow to simmer until the pumpkin is tender.


While the soup cooks prepare the mini meat balls. 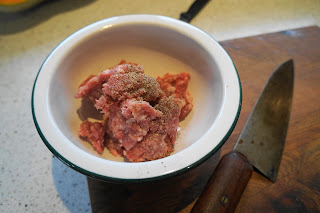 Combine the mince with the seasoning and roll into little balls. Because the meat has a fair amount of fat no other ingredients are required.

If the meat is very lean I would add some fresh bread crumbs to soften up the mixture. 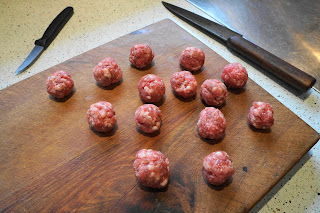 They should be rolled small enough that they can be eaten in one bite.

Heat the oil in a pan and cook the little balls. 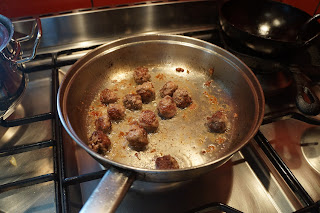 Allow them to brown on the bottom before attempting to turn or they will fall to pieces.

They will only take a few minutes to cook. 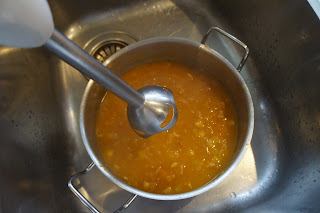 Once the pumpkin is cooked, blend it into a smooth soup using a stick blender.

If you don't own such a gadget, then a kitchen whizz or even a simple potato masher will do the job. 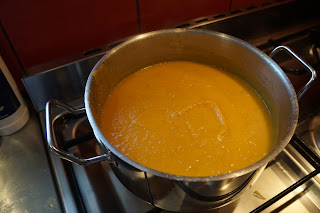 Once blended return the soup to the heat and check for seasoning. Pumpkin soup requires quite a lot of salt, so don't be frightened to add it.
Plate the soup into bowls, drop the meat balls on top and sprinkle with a little parsley. I served our soup with slices of ciabatta. 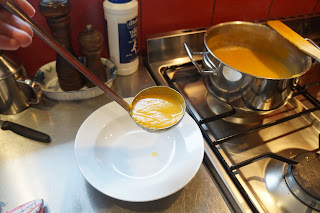 Time to cuddle up in a cosy blanket and pull out the knitting my friends. Winter is on the way.
Posted by Unknown at 02:10